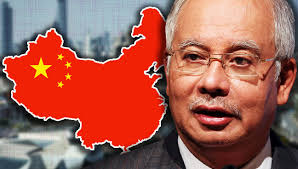 Najib’s pivot to China picked up the greatest momentum since his father Tun Razak – a truly deep strategic move that will shape the future of our country for good many many years to come.

An early endorsement of President Xi’s Belt & Road Initiative (BRI), while other dallied around with suspicion has allowed us to benefit from this early mover advantage. Our deft handling of the South China Sea issue too has also endeared us to the Chinese leadership.. Contrast this with the fiasco of Singapore’s Taiwan and South China Sea stand has led to Singapore’s PM not being invited for the BRI Heads of State summit in Beijing. It’s a slap on the face of many that believe that Singapore can do no wrong – they are a perfectly run country. How truly wrong this is – a Singapore Chinese Prime Minister unable to develop a friendship with a Chinese leadership while a Malay/Malaysian leadership has endeared himself to Xi, Li and many others.

A world’s first of sorts. Najib being humble enough to visit Ma at his office and also have Ma come aboard as an Adviser is a strategic move that would change the face of trade in our country.

Forget the political parties! This is the Federal government initiative to uplift the Indian community under the personal direction of the Prime Minister. Love or loathe him – but this is historical, unprecedented – a first of its kind. Najib may have his missteps – but then aren’t we all fallible? Till date Najib’s contribution to this nation and his inclusive policies far outpaces that of an any Prime Minister ever including the one who have called the Indians in Malaysia “keling.” so as to garner dissident Malay support!

Attitudes for personal success – the attitude of gratitude